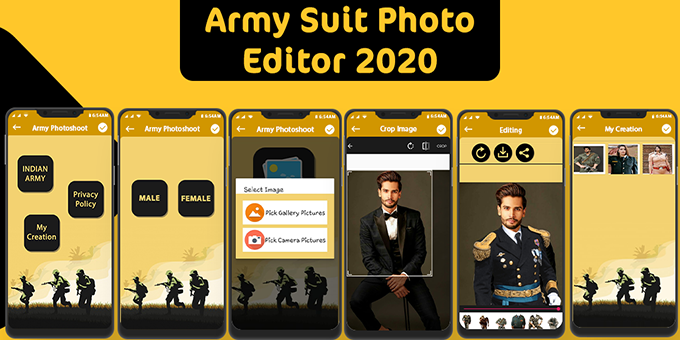 Army Suit Photo Editor - Army Photo Suit, is an effect of different styles of international army. If you love to wear army uniform or want to see your friend in army dress to see how you will be looked in any country soldier uniform. It’s a one of the best free android photo editor apps, having Collection awesome suite dresses for both male and females. This Suit Changer Photo Editor is a Mobile fun app, specially made for people who love to take more photos in Indian Army dressing. This App allows you to Captures a photo through your mobile camera or Choose picture from Gallery and gives it an Army Look.

Indian Army photo suit editor is really easy to use. Just take a picture of your face and pick one army outfit from our army dress photo dress app.

New Indian Army Photo Uniform Editor - Army Suit maker provides a different type of army suits for both male and female with several colors and sizing. By mean of this Indian army photo editor entertain yourself with family and friends by army suit editor and pick up the best Indian army suit which fits your personality and show yourself as army man.

Army Photo Suit Montage app have latest collection of police photo suits for man and woman. This app also have smart photo cutter so you can cut face precisely. We have also included effects to make final photo more realistic.

This Best Indian Army Dress Photo Maker : Army Suit developed for those people who have enthusiasm in photo editing apps specially in indian army dress photo maker and wanted to be a good indian army soldier.

Commando Photo Suit provides official and causative suit just about into your wardrobe. There ar in type of frames during this app. Referred to as army man, who ar attending to defend against war and attack.

If you like to dress up games then Army Photo Suit Editor (All in One) 2019 is the perfect alternative app, no need to spend money on expensive Army Suit and dress up yourself easily and make your special memories pictures in collage templates, photo in photo and magazine PIP style, collage maker, photo grid and make them unforgettable.

Indian Army Photo Suit Editor – Uniform changer of girl and boy is one of the very best smartphone app having a variety of more than 20 man military suits and also women Indian army suit is also provided.