by axisway in Plugins WordPress Plugins 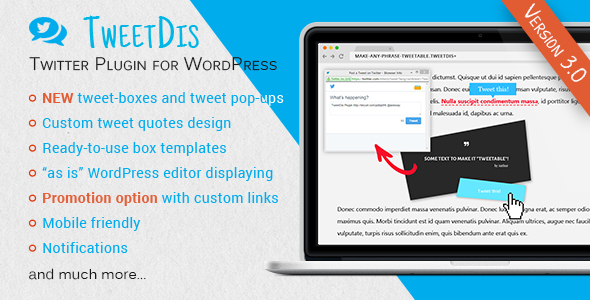 TweetDis is a Wordpress plugin, that will display a floating “call-to-action” above any piece of text you choose. Furthermore, with the new plugin version, you can place any bit of information into NEW TWEET-BOXES! And once you click on the text, the plugin will automatically create a tweet out of it as well as place the other piece of text into tweet-box. (In other words, TweetDis makes any piece of text “tweetable”)

99% of people won’t tweet anything, but the title of the post! Unless you MAKE THEM TWEET SOMETHING ELSE! You should put “call-to-actions” in your article, if you think that a specific phrase deserves to be tweeted. Otherwise people will just pass by all your awesome ideas and quotes.

While WITHOUT TweetDis it’s really a pain to tweet a certain phrase from your article. Do you really think anyone will go through the following 7 steps?

Please Note: This plugin uses shortcodes to make phrases “tweetable”. And it doesn’t interfere with your regular social buttons.